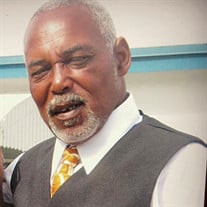 Earnest Littlejohn Jr. was born in Spartanburg County, South Carolina on November 30, 1956 to the late Earnest and Ruth Littlejohn. He was the eldest of six children. Earnest received his education in the Broward County Public School Systems. Attending Sanders Park Elementary School, Pompano Beach Middle School, and Pompano Beach High School. Although he graduated from high school in 1974, Earnest was never able to walk the stage, due to a mental illness diagnoses. Although he spent his young adult in Florida State Mental Hospital his classmates never forgot him. His mother and family refused to have him miss out on life. While in the S. Florida Hospital, visits were weekly. He was later relocated to Chattahoochee Mental State Hospital, were the visits became a monthly reoccurrence. As the family steadily embarked upon this small town, the hospital staff and community became part of the family. With this dynamic support system Earnest’ mental state stabilized and brought on bigger family occasions which involved other patients from the hospital who stop by for a meal or conversation. As his mental health improved, he later received off campus privileges in which they weren’t ready for. For little did they know his oldest nephew was starting college as part of the FAMU “Marching 100” and that 1 ½ hour trip to Tallahassee was easy for Earnest, as he was spotted by a staffer from the hospital. With his ability to handle crowds on his trip to Tallahassee, in 1998 he was released. With these constant visits, Earnest did not miss family time or special occasions and was able to readjust to everyday society. Earnest returned to Pompano reacquainting himself. You will find him walking Sander Park neighborhood daily with stops at the corner stores and gas station. He did not meet a stranger for all was greeted with “Hey Buddy”. Earnest enjoyed his coffee, soda and cigarette was not to be seen without or trying to get. Earnest loved wood working, cars, and fishing. In the past 2 months he grew tired. He had been diagnosed with COPD from a lifetime of smoking. On March 31, 2021 , the 11 year anniversary of when his mother’s was called home. The angels saw that it was befitting to call him on the same day, for his #1 supporter will be there to cheer him on. Earnest leaves to cherish his life memories; aunts: Fannie Harris, of New Jersey, Vera Hawkins, of Deerfield Beach, FL: brothers: Kenneth (Carolyn), Michael, Maurice: sisters: Hessie, Carla, of all Pompano Beach, FL; nephews: Michael (Ericka), of Margate, FL, Jon (Chisato), Maurice, Ernest, Rashad, Brandon, William all of Pompano Beach, FL, Marcus, of Georgia,: nieces Montez (Jonathan), of Pompano Beach, FL, Krystle, of Georgia, Chekala, of Margate, FL, Evelyn, of Tennessee. God siblings Rhonda & Anthony Jefferson and a host of great nieces & nephews, cousins, and buddies.

Earnest Littlejohn Jr. was born in Spartanburg County, South Carolina on November 30, 1956 to the late Earnest and Ruth Littlejohn. He was the eldest of six children. Earnest received his education in the Broward County Public School Systems.... View Obituary & Service Information

The family of Earnest Littlejohn Jr created this Life Tributes page to make it easy to share your memories.

Send flowers to the Littlejohn family.