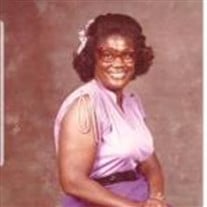 THE OBITUARY Her Genesis It was on a Monday, December 20, 1926, when the union of Christian parent’s Superintendent Elder Boston Black and Nora Wilks Black were blessed with their fourth child, Doris Black in Sanderson, Florida. Doris received her former education where she attended The Old Dillard High School, a historic school formerly known as the Colored School, in Fort Lauderdale Fla. At the age of thirteen she accepted the Lord Jesus Christ and was filled with the Holy Spirit at the House of God Ministry during a noon day service. Filled with excitement she continued to attend the services over the next week during the day and at night, at which point she was compelled to do the work of the ministry for the remainder of her Christian life. She continued her service at Black’s Memorial Temple Church of God in Christ, under the leadership of her father Superintendent Elder Boston Black. In 1943, at the age of sixteen she met and soon married her husband of 52 years, the late Mr. Edward Vance. To that union was born one son, Melvyn Vance who preceded her in death in 2008. A Woman of Virtue Pastor Doris Vance aspired to be a virtuous woman. She strove to embody the Proverbs 31:10-31 verses. Her priority was God first, her family and the church. With a servant’s heart, her career involved working as a private duty assistant and serving many families. As a woman of virtue, being called and chosen, Pastor Doris Vance continued in Deliverance Ministry under the leadership of Pastor George Johnson at Jesus Supernatural Church of Deliverance, where she enjoyed playing the drums and using her gift of ministry as an anointed psalmist whereever she was called to sing and bring Great Joy. With the ability to hear the voice of God, Pastor Vance was led to co-labor at The Revival Faith Ministries under the leadership of Apostle Janice L. Dillard in 1989 and was ordained as a Pastor in 1990. Her passion was known every where she went as a powerful witness in song and deeds. Throughout her ministry, Pastor Vance led many souls to Christ with outreach through evangelism, singing and witnessing. It was her heart’s desire to give everyone the gift of Life through the Lord Jesus Christ. Her passion to see soul’s come to Christ never ceased and continued even to the day of her heavenly departure. In every direction that Pastor Vance traveled she declared Proverbs 3:5-6. “Trust in the Lord with all thine heart and lean not unto thine own understanding. In all thy ways, acknowledge him and he shall direct thy paths.” A Time to Part Pastor Doris Black Vance was called into the arms of Jesus on December 20, 2021. She was preceded in death by her beloved parents, Superindent Elder Boston Black and Nora Black; Her husband, Edward Vance, her son Melvyn Vance; siblings, Nathaniel Black, Grady Black, James D. Black, Isa Mae Ellis, Eula Gray, Vernell Clark, and Lonnie Black. Those left to cherish the memories of her life are: her brothers, Robert Black(Ella) and Willie Black, her grandsons; Tyrone Vance, Markus Ryan Vance, Idi Vance(Pamela) Melvyn Dwayne Vance, great grandchildren; Jordin Vance Riley, Musiq Vance, Kailyn Vance, Kiah Vance, and Enda’ Vance; nieces and nephews, Lurena B. Cobb, Celestine B. Campbell, Dr. Natalie B. Jones, Jeffrey Black, Edward Black, Chuck Black, Jerome Black; Sterling Fields, Daryl Fields, Cathy Knight, Marilyn Peeples, Doris Simon, Jackie Black, A’licia Gray Scott, Immanuel S. Gaines,Robert R. Black, Daryl W. Black and Rodney Black, Alonzo Neal, Bernard Black, Shandra Black Robertson,Maurice Black, Dorothy Ellis, Consuela Knowles, Nora Black, Sharika Black, Terrance Holloway, Boston Black, Nathaniel Black, Brandon Black, Kelvin Black, Talisha Black, Lenard Black, Libby Black, Albert Robinson III; and a host of great nieces, nephews, cousins, godchildren and a very special daughter, Brenda Byrd, friends, comrades and fellow laborers of the gospel.

THE OBITUARY Her Genesis It was on a Monday, December 20, 1926, when the union of Christian parent&#8217;s Superintendent Elder Boston Black and Nora Wilks Black were blessed with their fourth child, Doris Black in Sanderson, Florida. Doris... View Obituary & Service Information

The family of Pastor Doris Black Vance created this Life Tributes page to make it easy to share your memories.

Send flowers to the Vance family.