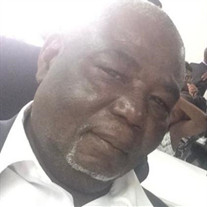 Psalm 73:26 My flesh and my heart may fail, but God is the strength of my heart and my portion forever. Dieunoussa Ceremy was a loving, caring, sweet, and nurturing soul. He was a great and loyal friend to many, a god father to over a dozen children, a beloved brother , and confidant. After much suffering, he was granted his wish to spend his last days at home surrounded by his closest family and the ones dearest to his heart. On August 26th, 2020 at the age 71 he ultimately took his last breath and went on to rest in the care of his Heavenly Father. Dieunoussa also known as "Dennis" was born August 28th, 1949 in La-tortue, Haiti where he spent his days as a young boy. In 1963 he moved over to Nassau, Bahamas. He spent most of his youth there in the Bahamas. As a young adult, he migrated to the United States in 1977 and made Fort Lauderdale, Florida his permanent residence. Shortly after his arrival to Florida, he met his first wife Carmelite Etienne whom he married in 1986. From that marriage, he was blessed with his two beautiful daughters, his first born Evelyn Ceremy and Vivian Ceremy the youngest. In 1990, his first wife passed away leaving him alone to raise their two small children. He soon met his now beautiful wife Estella Nordelus whom he spent the rest of his life with. Together they shared the purest form of love one could only imagine to see in this life. With this lovely union, Dieunoussa took in her children Leonie, Lina, and Erick. Together, they raised these children as one family. One could only pray to experience a life with a man with such a pure heart. He was a jack of all trades, literally. At times, he would be twirling his thumbs with his wrench and various other tools as a mechanic. He was a beast on the grill and in the kitchen as a personal chef to his loved ones. He enjoyed barbecuing and entertaining guests. He was also the local transportation man to his community; taking the neighborhood's children to and from school. Who could ever forget that infamous blue station wagon? Dieunoussa was a natural born leader a nd an entrepreneur at heart. He was well known as one of the first and highly sought after Dj’s in the South Florida area. He loved music! Music was his passion and everyone knew it. He would ride around town with his speakers blasting music loud enough to hear him coming from miles away. Dieunoussa was a happy and humble guy who was also the life of the party, he did it all! Dieunoussa appreciated his family and friends. Oftentimes , he would spend his afternoons making calls and house visits to those he called friends and the ones he held dear to his heart; just to say hello or to check on their well-being. He was always just a phone call away when needed. Dieunoussa leaves behind his wife Estella Nordelus. Children: Evelyn Ceremy, Vivian Ceremy, Leonie Narcisse, Lina Desilus, and Erick Nordelus. His Siblings: Anacia, Conseptia and Mesen Seremy. Grandchildren: Jadillya Ceremy, Lareesha Henry, Bianca Henry, Royalty Ceremy, Stephanie, Daphnie, and Danny Desilus, Penie St Firmin, Oilna Harris, Androv, Manovna, and Navline Narcisse, Joshua and Jada Nordelus. Dieunoussa is preceded in death by his father Satira Ceremy, mother Mirasil Victor, ex-wife Carmelite Etienne, brothers Satira “Eugene” Seremy, Lourverture Seremy, sisters Suzanne and Virginia Ceremy.

Psalm 73:26 My flesh and my heart may fail, but God is the strength of my heart and my portion forever. Dieunoussa Ceremy was a loving, caring, sweet, and nurturing soul. He was a great and loyal friend to many, a god father to over a dozen... View Obituary & Service Information

The family of Dieunoussa Ceremy created this Life Tributes page to make it easy to share your memories.

Send flowers to the Ceremy family.