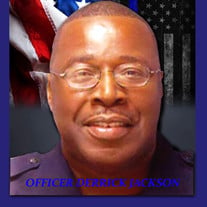 Derrick Jerome Jackson Sr. was born in February 25, 1964 to the proud parents of Charlie Jackson Sr. (deceased) and Willie Mae Jackson. At a young age, Derrick joined First Baptist Piney Grove. He attended school in Broward County graduating from Piper High in 1983. After high school, He decided to join the armed forces where he served for a few years. In 1990, He met the love of his life, Shawn Perry. They married then, added to their already beautifully blended family. Derrick was a loving husband, devoted father and friend to all who crossed his path. On December 14, God’s will was done when he allowed his beloved child to take his rest. Left to cherish the fond memories of Derrick J. Jackson, Sr. are his loving wife, Shawn Perry-Jackson of 25 years; one daughter, Shana Bright- Dixon (Courtney) ; three sons, Derrick, Jr. (Janelle) , Devin and Donovan. His loving mother, Willie Mae Jackson, three sisters, Gloria J. Jackson, Karen Williams (Bruce) , and Melinda Bruton (Fred) ; two brothers, Charles Jackson (Pamela) and Larry Jackson, Sr. ; five grandchildren, Jaleesa, Jayden, Colin, Chyle and Jayla and a host of nieces, nephews, great nieces & nephews, close relatives & sorrowing friends. To those who knew him well, he was known as “Darryl”, “Uncle D and “Jack” and although he is gone, the love and generosity he imparted will never be forgotten. “For I am now ready to be offered, and the time of my departure is at hand. I have fought a good fight, I have finished my course, I have kept the faith: Henceforth, there is laid up for me a crown of righteousness, which the Lord, the righteous judge, shall give me at that day: and not to me only, but unto all them also that love His appearing.”

The family of Derrick Jerome Jackson created this Life Tributes page to make it easy to share your memories.