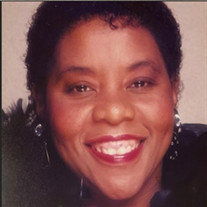 Celebration of life for the Late Dr. Delois (Deedee) A. Wilson The late Dr. Delois A. Wilson was born to James and Wadrine Boyd in Pompano Beach, FL on June 30, 1954. She received Jesus Christ as her personal Savior at a very tender age and joined St. John A.M.E. Church in Pompano Beach, FL. Dr. Wilson graduated from Deerfield Beach High School in Deerfield Beach, FL in 1972. Upon graduation, she matriculated into the Florida A&M University in August of 1972 and subsequently graduated in August 1976 with a Bachelor of Science Nursing Degree. Dr. Wilson received the degree of Master of Science Nursing Degree from University of Phoenix, Plantation, FL. Moreover, Dr. Wilson has been a lifelong learner where she eventually pursued and obtained her PhD in Health Science, Specialty Health Management and Policy in June 2019 from Walden University. Dr. Wilson was married to Marven Wilson for 20 years and is the mother of Elijah Hankerson and the late Cheryl Hankerson and later became the proud grandmother of six beautiful grandchildren she reared in her daughter’s stead; Kayla Brady, Cheryl, Bianca, Duanette, Shawanna and Michael Hankerson. She also had the pleasure of being an active part in the lives of: Kizzy Rogers, Tajuana and Felicia Wilson. Cherished memories of Barbara Davis, Jacksonville, FL; Cynthia Lee, WPB, FL; Victor Boyd, Boca Raton, FL; Zachary (Pam) Boyd, Virginia Beach, VA; and Quanya (Charles) Harris, Tallahassee, FL; her siblings, she will never be forgotten as they celebrate her life (James Boyd Jr., Veronica and Gary Boyd preceded her in death). She was loved by two adoring godsons; Elder Tyrone Kintchen and Terrence Johnson, and will be forever missed by grand children, great-grandchildren and a host of nephews, nieces, cousins and friends. Dr. Wilson served with distinction for 29 years at Holy Cross Hospital, Fort Lauderdale, FL in various capacities: Staff nurse, Infusion nurse, Charge nurse and as Nurse Manager in the Cancer Center. Upon retiring from Holy Cross Hospital, she served 6 years as a Registered Nurse at the Armor Correctional Health Services, Pompano Beach, FL; finally retiring from health care service to the public in 2019. As previously stated, Dr. Wilson was called to serve Jesus Christ our Lord and Savior at a very tender age where she attended St. John A.M.E. church. She enjoyed serving and singing in the choir and in a leadership position of the Young People Department (YPD), where she would oversee and train youth under the Pastoral Leadership of the late Rev. I. F. Mitchell Sr. Sunday School Conventions were especially special to her as she attended them faithfully during the summer months at various A.M.E. churches. In 1970, she joined The Gospel Arena of Faith where she has served faithfully until her passing under Apostle Dr. T. G. Thompson. Dr. Wilson served in various capacities in the church. She was a part of the gospel choir, the cooking committee, Supervisor of the Women Department and served as a personal assistant to Dr. T. G. Thompson. In the year of 2012 she became Overseer Wilson. On Thursday, October 28, Dr. Wilson was transitioned from mortality to immortality and joined that great cloud of witness in heaven’s glory.

Celebration of life for the Late Dr. Delois (Deedee) A. Wilson The late Dr. Delois A. Wilson was born to James and Wadrine Boyd in Pompano Beach, FL on June 30, 1954. She received Jesus Christ as her personal Savior at a very tender age and... View Obituary & Service Information

The family of Delois Ann Wilson created this Life Tributes page to make it easy to share your memories.

Celebration of life for the Late
Dr. Delois (Deedee) A. Wilson
The...

Send flowers to the Wilson family.