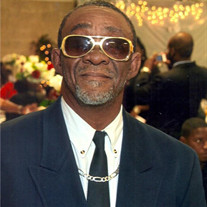 David Cooper, Jr. was born in Lake City, South Carolina on July 28, 1956 to the parents of David Cooper, Sr. (deceased) and Hattie Cooper. He attended Deerfield Beach High School and worked for Boca Lago Country Club, Florida Blacktop, and the City of Deerfield Beach. Later on in life he joined Cathedral Church of God and became active in the city of Deerfield Beach community as a Football Coach for the Deerfield Beach Raiders and Bisons. David was well known by family, friends and loved ones for his skill and passion to cook on the grill. “He was the GRILL MASTER”. He took great delight in preparing his extraordinary Barbecue Sauce. He utilized his skill and passion by joining hands together with his brother Bobby Cooper in feeding the homeless. David loved his family so much that he sacrificed portions of his life to all of his family; he really enjoyed feeding all his nephews and nieces; he had a heart of unconditional love and honor for his mother and he showed it by taking care of her daily. He is preceded in death by his brother: Daniel Cooper. He leaves to mourn his loving mother: Hattie Cooper; sister: Jane (Vincent) McKeever, two brothers: Bobby (Juliet) Cooper; Joseph (Marie) Cooper; three uncles: Willie James (Christine) Cain, Eddie Cooper, and John Wesley (Mattie) Cooper; four aunts: Florence Graham, Laura (Joseph) Howard, Annie Major (God-Mother), and Madgeline Mclain; Godson: Gerald Finklin II. A host of nephews, nieces, cousins and friends. Special sister in Christ: Delores Metts; special cousins: Betty, Ruby, Janie Mae, and Arleen; special friends: Mr. and Mrs. Bernard Adams & Family, Janet Kearse, Quentin Farrington, and Willie Jones.

The family of David Cooper Jr created this Life Tributes page to make it easy to share your memories.

Send flowers to the Cooper family.