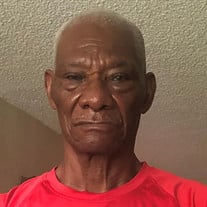 Biography Dalius Baptiste December 17, 1934 - January 17, 2022 “Precious in the sight of the Lord is the death of his saints.” Psalms 116:15 Mr. Dalius Baptiste was born on December 17, 1934, in Petit-Coin, hamlet of Saint-Louis du Nord, Haiti. He was the youngest child of a large family, born of the late Mr. Dalveris Baptiste and Ms. Idalia Dalge. At a very early age, Dalius was preparing his future. He started cultivating the land to gain enough resources to start a family. He later united in marriage to the love of his life Dezilia Odette. From that relationship, God blessed them with 10 children: Yvette, Dorcilia, Desinette, Louisinette, Niques, Rouzier, Guillaume, Jean-Robert, Danise, Mirlande and Luckson. He was a very hard worker. He used to work from sunrise to sunset, rain or shine in order to provide for his children. The education of children was part of his agenda; he wanted them all to succeed in life. He left Haiti for the US accompanied by his wife in June 1999. As soon as he arrived in the new land at the age of 65, he started working to provide for the rest of his grown children left in Haiti. He was able to make enough money to send for 5 children and 3 grandchildren. Dalius was a caring and loving husband, father and grandfather. The reunion with the majority of the children gave him another reason for living. His desire was to see all his children and grandchildren make it to the land of opportunity (USA). Unfortunately, the dream didn’t come true for a few of them. Dalius was a good husband and a faithful companion to his wife. The passing of his wife was a devastating blow to him. She left a deep hole in his heart that nothing could fill. The reason for living was completely gone. For the past years, the desire to rejoin his wife was always part of his conversation. His departure for eternity on Friday 14th of January, 2022 at the age of 88 years old was mainly caused by heart-ache. His print of kindness, warmth, love and friendliness will remain with his family and acquaintances. We pray that the peace of God, which surpasses all understanding, will guard the hearts and thoughts of: His children: Yvette, Dorcilia, Desinette, Louisinette, Niques, Rouzier, Guillaume, Jean-Robert, Danise, Mirlande,\ and luckson; Grand and great grandchildren: Jasmin and husband Jean-Baptiste, Myriame, Bradley, Cassandra, Romanov, Richardson, Love-jamesca, Stephanie, Zidane, Mylee, Ben, Jason, Guilanda, Briana, Xena, Jamesley, Sharma, Rebecca, Lourdjina, Richardson, Morline, jeff, Ludnie, Jessica, Windlee; Great grandchildren: Janiyah, Jayla, Jahon, Ramona, Amoura and Janae; In-Laws: Leontes, Glemeau, Michelet, Bobby, Wysline, Camille and Nadia; Families and Friends: Baptiste, Bien-Aime, Phillipe, Alexandre, Alce, Mesadieu, Saint-Hubert and Bertrand.

The family of Dalius Baptiste created this Life Tributes page to make it easy to share your memories.

Send flowers to the Baptiste family.