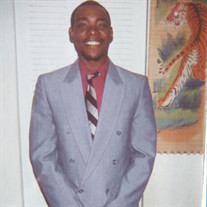 Born Dec. 30, 1963 at 5:30 AM to Annie Pearl Thurston and Genius Dexter of Warwick, GA, Clifford Bernard Dexter took his first breath and became a blessing to all that he would meet during his journey here on earth. In the years that would follow, his family would move to Pompano Beach, Florida, where he would graduate from Broward County Public Schools and eventually attend ATI Career Training. Upon graduation, he would earn the Executive Director’s Certificate of Achievement by maintaining a 4.0 GPA, officially becoming an Automotive Service Technician, finally able to fix his riding lawn mower and establish a fruitful career in the lawn care services. Clifford loved pruning and maintaining lawns like no other, finding immense joy in the Art of Landscaping and Design. He loved making his customers smile, going above and beyond to beautify every single time. Clifford often bragged about his technique, perfecting his craft – one yard at a time! On March 30, 1992, Clifford was united in Holy Matrimony to his surviving wife, Sandra, with whom he would share five children with: Bridgett (“Bree Bree”), Deaunte (“Te’”), Clifford II (“Li’l Clifford”), Tempestt and O’brien (“O.B.”). He was a devout Christian and an active member of the 15th Street Church of Christ in Pompano, before relocating to Douglasville, GA in 2019. An AMAZING father and friend to so many, Clifford wanted to be closer to his loving children and grandchildren with whom he enjoyed spending a great amount of time. While in Douglasville, he would go on to worship at the Renaissance Church of Christ. To know Clifford was truly to love him. He was fun, outgoing, caring and easy to talk to. He easily made friends everywhere he would go. When someone needed advice or a willing ear, he was often the first one they would call. He used his talents and life experiences to help and encourage others, while spreading the Word of God to everyone that would cross in his path. At 5:24 AM on Tuesday, July 23, 2019, God saw fit to call his soldier, Brother Clifford Bernard Dexter, back home. “Well done, good and faithful servant. Enter the joys of the Lord.” A man of God and loving father, he is preceded in death by his sister Janicey Dexter-Hallman, and paternal grandmother, Lucinda Parrish. Clifford is survived by his five children, including three sons: Deaunte, Clifford and O’brien; two daughters, Bridgett and Tempestt; and a god daughter, Taquilla. Clifford is also survived by his wife, Sandra Dexter; his parents, Annie Thurston and Genius Dexter and two brothers, Genius and Tyrus. Clifford leaves behind a legacy of ten wonderful grandchildren and a host of aunts, uncles, nieces, nephews, cousins, church friends and family, by all of whom will he will greatly be missed.

Born Dec. 30, 1963 at 5:30 AM to Annie Pearl Thurston and Genius Dexter of Warwick, GA, Clifford Bernard Dexter took his first breath and became a blessing to all that he would meet during his journey here on earth. In the years that would follow,... View Obituary & Service Information

The family of Clifford Bernard Dexter created this Life Tributes page to make it easy to share your memories.

Send flowers to the Dexter family.