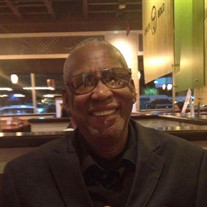 The Life and Legacy of Elder Charlie Joe Mack, Sr. And I heard a voice from heaven saying unto me, Write, Blessed are the dead which die in the Lord from henceforth: Yea, saith the Spirit, that they may rest from their labours; and their works... View Obituary & Service Information

The family of Charlie J. Mack Sr created this Life Tributes page to make it easy to share your memories.

The Life and Legacy of Elder Charlie Joe Mack, Sr.
And I heard...

Send flowers to the Mack family.