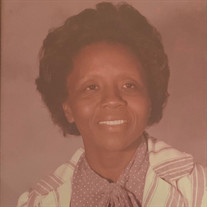 The Life of a Virtuous Woman - An Educator Extraordinaire The journey begins or the school bell rings on October 8, 1934. It was a misty, moist morning in the General Hospital of Nassau New Providence Bahamas, when the Lord blessed Beauman John Davis and Rowena Fouler Davis with a beautiful bouncing baby girl. They would name her Barbara Maria Davis. First period for Barbara was having the opportunity of being raised in a loving home with her parents and siblings. She was initially raised in the Catholic religion and attended kindergarten and the early elementary school grades at a Catholic school. Her father was a chauffeur for the American Consulate of the Bahamas, and this afforded him the opportunity to come to America for his employment. He would very soon after coming here, send for his family to join him. Barbara remembers being greeted at the dock by her father who had a large Mother Goose Rhyme book for her. This would provide the great spark and love for her “K” children (Kindergarten). It was the steppingstone to the pathway that would be her life’s journey. Second period was full of excitement as Barbara on April 12, 1950 was joined in Holy Matrimony to her high school sweetheart, Ernest C. Mackifield. God blessed this union with four children who all have preceded her in death; Peggy, Ernestine, John and Ernest Jr. Barbara enjoyed being a wife and mother. She always found time to be the cook, cleaner, tutor and number one cheerleader for her children. The third period was a long one as she continued her devotion to working in the Master’s vineyard. She was a dedicated member of the Church of Christ since obeying the Gospel of Jesus Christ in the summer of 1954. She worked diligently beside her husband who was a Minister of the Gospel as he performed his pastoral duties to congregations in Pompano Beach, Florida, then on to Mound Bayou, Mississippi back to Pompano and finally to West Palm Beach, Florida. Barbara would serve faithfully as a Sunday school teach, Ladies Bible Class leader, Sunday school secretary and anywhere she was needed. She was well known throughout the state of Florida as one of the pioneer leaders of the Annual Christian Ladies Encampment Retreat held annually in Palm Beach County with churches throughout the area. An Extended day was required as Barbara found time while being a wife and mother to obtain her Bachelor of Science degree in Elementary Education from Mississippi Valley State College and a Masters Degree from Florida Atlantic University. She would use this valuable training to pursue her other life’s passion of opening and expanding the minds of children. Barbara taught 5 years at IT Montgomery Elementary School in Mound Bayou, Mississippi. After relocating back to Florida, she dedicated 35 years of teaching to Markham Elementary and Pompano Beach Elementary School. When she retired in 1999, she commented the “The joy of it all, to God be thanks”. Last bell rings: As God saw that Barbara was getting tired, he called her home on Wednesday, December 9, 2020. She leaves to cherish her memory her devoted husband, Ernest C. Mackifield Sr. Grandchildren: Ernest Mackifield III (Lashonda) and Ashley Mackifield Allen (Corey). Siblings, Wilhelmina Davis, Bernard Davis (Cozey), Benjamin Davis, Wellington Davis and Hope Davis West. Great grandchildren: Ka’Nya C. Mackifield, Karia N. Mackifield, Caitlyn L. Mackifield, Courtney Scott. She was predeceased by four siblings; Dorritt Grant, Minerva Johnson, John Davis and Bryan Davis. In addition, a host of other family members and friends whose life she has touched will continue to cherish her memory.

The Life of a Virtuous Woman - An Educator Extraordinaire The journey begins or the school bell rings on October 8, 1934. It was a misty, moist morning in the General Hospital of Nassau New Providence Bahamas, when the Lord blessed Beauman John... View Obituary & Service Information

Due to COVID-19 guidelines, capacity at the funeral service at the 15th Street Church of Christ will be limited to 50 people.

The Life of a Virtuous Woman - An Educator Extraordinaire
The...

Send flowers to the Mackifield family.