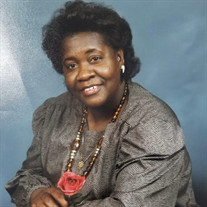 In 1974 Barbara dedicated her life to the LORD at her sister Frank’s house during their family reunion in Saint Petersburg, Florida. She was led to the LORD by Minister Mark Bell who is currently her Pastor. She was saved on the last weekend of the month of July in 1974. She later became a member of Bennett Temple Church of the Lord Jesus under the leadership of Bishop G.B. Bennett. Two years after being saved she met then her late husband Grady Jenkins. They were joined together in Holy Matrimony on September 4, 1976. As a faithful member of Bennett Temple she joined the #1 choir under the direction of Ruth Newkirk. She was later inspired to become the director of the Rainbow Choir; the Young Adult Choir in 1978, then the Young Seekers in 1983, she then started the UBH Male Choir (bka) United Brotherhood. These were just a few of her many accomplishments. She helped to rebirth men & women to a better life in the ministry, even to this day the fruits of her labor are yet felt by many who were uplifted because of her works. A TIME TO BE BLESSED Barbara was a Women of God, there wasn’t a day she did not reach and grab her bible or pray. She loved her job as a singer, choir, young adult choir, young seekers and praise dance director at the church. Whenever you’ll come over you couldn't leave without reading a bible verse to her. A TIME TO LOVE Barbara had a heart of gold. She loved and cared for her family and friends. She would babysit because she loved all her children equally. She also has a passion for sewing, she even sewed a wedding dress for someone. She BELIEVED IN BIG BREAKFAST every morning. She got a chance to become captain of the Miller’s Family Reunion Committee in July 2009. A TIME TO REMMEBER Barbara J. Jenkins was born on December 7, 1941. She was the 13th child of the late David and Bertha Miller in Pompano Beach, Florida. Barbara is preceded in death by her husband Grady E. Jenkins, and son Jerome S. Jenkins. Barbara leaves to cherish her memories: her #1 daughter Pamela; god daughter Felicia, Chrishonda, Tiffany; 2 sisters; God Children, grandchildren: Amy (Kenneth) Dennis, Timothy E. (Tiffany) James; great grandchildren, nieces, nephews, cousins, host of friends and neighbors.

In 1974 Barbara dedicated her life to the LORD at her sister Frank&#8217;s house during their family reunion in Saint Petersburg, Florida. She was led to the LORD by Minister Mark Bell who is currently her Pastor. She was saved on the last weekend... View Obituary & Service Information

The family of Barbara Jean Jenkins created this Life Tributes page to make it easy to share your memories.

In 1974 Barbara dedicated her life to the LORD at her sister...

Send flowers to the Jenkins family.