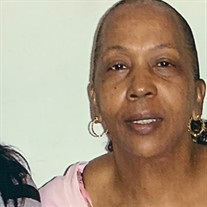 Arpie (Oprah) Lee Cunigan was born on January 6, 1955 in Oakland Park, FL to Raymond and Leoda (Clark) Cunigan. Oprah, as she was affectionately called, was educated in the Broward County Florida school system and graduated from Pompano Beach Senior High School in 1972. She pursued additional training in fashion design and modeling during her early adult years which was an enjoyment to her and others who were captivated by her broad smile and pleasant personality. Oprah later married Gregory Larkins. Oprah was dedicate to her children, Dana and Dereck – they were the love of her life. Oprah retired from University Hospital in Ft. Lauderdale, FL after twenty years where she worked as a cook. She later worked for the Broward County Public School system until her health began to decline. Her greatest work in life was her Christian ministry. Oprah received the Lord as her personal savior at an early age at New Bethel Baptist Church in Oakland Park, FL. She immediately became involved with youth ministry and the choir. She later joined Have Faith In God Prayer Ministry, International under the leadership of her brother, Bishop Randolph Cunigan (Deceased). Over a period of time she served as ministry leader of the choir, the food ministry, and the tape and radio ministry. She served with fervor and was well noted for her commitment to sharing the love of Christ through her beautiful voice and singing, serving food to the community, and sharing the Word. On Tuesday morning, August 4, 2020 our beloved Arpie Lee Cunigan Larkins traded her earthly tabernacle for a house not made with hands, eternal in the heavens. She was preceded in death by her parents, Raymond and Leoda Cunigan, her brother, Bishop Randolph Cunigan, and sister, Cynthia Cunigan. She is survived by her two children, Dana L. Larkins and Dereck R. Thomas; one brother Rev. Cecil B. (Karen) Cunigan, Woodbine, MD; six grandchildren, Tya Williams, Dashja Thomas, Dereck Thomas, Jr., Dar’Kyra Thomas, Dereck Thomas III; plus two great grandchildren, Chase Miranda, and Tavon Morgan; nephew Marcus Cunigan, one great nephew Roman-Josiah Cunigan and one godson, Joseph White. Oprah was loved and touched by all of these along with a host of other cousins, family members, and friends. Her contagious smile and laughter will be missed.

Arpie (Oprah) Lee Cunigan was born on January 6, 1955 in Oakland Park, FL to Raymond and Leoda (Clark) Cunigan. Oprah, as she was affectionately called, was educated in the Broward County Florida school system and graduated from Pompano Beach... View Obituary & Service Information

The family of Arpie Lee Larkins created this Life Tributes page to make it easy to share your memories.

Send flowers to the Larkins family.