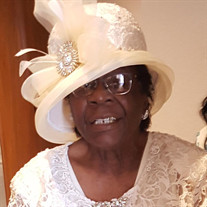 Obituary Annie Bell Folson, affectionately known as ‘Modear” was born in Midville, Georgia to the late Willie and Nellie Lewis. At the age of 9, the family relocated her to Pompano Beach, Florida. The union of Willie and Nellie Lewis would produce 6 siblings. (Johnny Mae Lewis, Richard Lewis (Lovelle), Albertha L. Gouch (Dorsey), Rebecca Phillips (Wesley) and Mattie Lewis, they all preceded her in death. Yes, she is the last of the Patriarch, Willie Lewis and Matriarch Nellie Lewis’s offspring. Her early formal childhood education was received in the Broward County Public Schools. She retired from the Forest Hills Elementary School, as a Lead Facilitator, after 29 years in the Broward County School system. After receiving salvation, she loved reading and studying her bible, quoting scriptures and living holy; She also loved singing, participating in prayer calls and teams. She strongly believed it was her mission to visit the sick and shut-in, in hospitals and nursing homes; She believed in praying for the sick and anointing them with oil. Yes, she did the “Work of an evangelist.” She was also definitely a “Virtuous Woman” when it came to her family. Great housekeeper, cook and baker! When it came to getting things done: “She did it Her Way; With or without you. On her terms.” Uniquely driven! In 1989, her husband joined Cathedral Church of God and she soon followed, under the leadership of Bishop Quan Miller. After 25 years of serving faithfully at COG, they both moved their membership. They joined Hopewell Baptist Missionary Church in 2014, under the leadership of Pastor Robert Stanley. Both declared that their current membership was going to be their last church on this side. She felt right at home finding longtime friends and family welcoming them there. She happily continued to attend a Senior Community Outreach of HMBC on Thursdays which she was already a part of. The senior pastor appointed them to serve on the deacon and deaconess board. She served dutifully and joyfully at HMBC until her health began to fail in the last year. She loved her pastor and his wife, Sis. Alene Stanley. She also enjoyed viewing the Sunday services from the virtual audience until the Lord called her home. Over the years in her residential community, she participated as a voting poll deputy, the local AARP group meetings and the City of Coconut Creek gym membership activities. She departed this life on November 9, 2021. Two of her children preceded her in death: Joshua Folson and Vanessa Folson Shelton. ‘Modear’, leaves to cherish her memories, her loving and very supportive husband, Calep Folson of sixty-six years. Three daughters: Audrey Folson, Linda Folson, Myra Folson McNair and John Hopkins, the special friend of Myra and our family. (Modear referred to him as ‘My John’). Eight grandchildren, seven great-grandchildren and one Great, great-grandson which she loved dearly; numerous nieces, nephews, cousins, friends and extended family spanning many generations. “Oh, that I had wings like a dove; then I would fly away and rest!!” Psalm 55:6

The family of Annie Belle Folson created this Life Tributes page to make it easy to share your memories.

Send flowers to the Folson family.