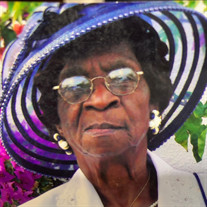 Annie Mae Jackson Anderson was born in Sylvania, Georgia to the late Lottie Hagan and Lawrence Chess on June 7, 1931. Annie was adopted and spoiled by Richard and Mary Jane Jackson and raised with love. She attended public schools in Georgia. In 1949 she met and married Clifford Anderson. To this union three children were born. In 1954 Annie and Clifford moved to Pompano Beach, Florida. She later became an independent single mom who worked, cooked and provided for her children. Years later she met Robert Floyd, Sr. and a son was born. Annie was a loving and outgoing person; a people’s person. To know her was to love her, she loved to cook and bake; everyone knew her for her famous cakes. Annie joined Antioch Missionary Baptist Church in 1981, where she served for 38 years until her health failed. She was a devoted and faithful servant who loved God and did whatever was needed to be done in the church to please him. Every auxiliary she was in she went over and beyond also stayed committed to her job. Being an usher was her passion. Whenever there was a need for an usher, Annie was there. This is one job she loved and did it willingly. Annie never knew how to drive, she walked EVERYWHERE she wanted to go and did it with no problem. Annie is preceded in death by her son Clifford Anderson, her sister Ruthie Montgomery and daughter in law Cheryl Floyd. She leaves to cherish her memories: three children: her daughter Gloria Jackson of Tamarac, FL, two sons: Larry Anderson and Robert Floyd, Jr. of Pompano Beach, FL; five grandchildren: Shevelle, Kisha, John (Tameka), Robert III, and Xavier; one sister: Dorothy Sims; fifteen great grandchildren and four great great grandchildren, special nephew: Edward Wright; best friend: Barbara Jenkins, a host of dear nieces, nephews, cousins, other sorrowing relatives and friends.

Annie Mae Jackson Anderson was born in Sylvania, Georgia to the late Lottie Hagan and Lawrence Chess on June 7, 1931. Annie was adopted and spoiled by Richard and Mary Jane Jackson and raised with love. She attended public schools in Georgia.... View Obituary & Service Information

The family of Annie Mae Anderson created this Life Tributes page to make it easy to share your memories.

Annie Mae Jackson Anderson was born in Sylvania, Georgia to the...

Send flowers to the Anderson family.