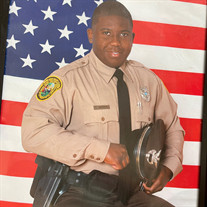 Adly Joseph was born on January 18, 1991 to Amonio Joseph and Viergenie Joseph in Fort Lauderdale, Florida. He was raised in Pompano Beach (Golden Acres) and attended Markham Elementary, Crystal Lake Middle School and Blanche Ely High School. Adly was always a caring person and loved smiling and laughing. He started his career in professional protection first as a security officer and eventually landed his life long job as a police officer serving Miami Dade County. Adly always talked about becoming a police officer and worked hard to accomplish that goal. Adly was always looking for advancement and was recently promoted to field training officer with Miami Dade Police Department. Adly was also a family man who loved his wife, children, parents and his sister. As a child Adly was very protective of those around him and would openly speak out against wrong doing. His family could always feel how much he loved them. On October 5, 2011 Adly became the father to a beautiful daughter named Avanti Joseph. Becoming a parent was a life changing event for Adly. He always spoke of how joyous the moment was when he knew he was going to have a child. Adly married the love of his life on September 15, 2014 and their union was blessed with two more beautiful daughters, Amiyah (Born August 22, 2014) and Aniyah (Born June 20, 2017) along with a step-son (Stephen born August 6, 2005). Adly loved his parents and sister so much. His father, Amonio and his mother Viergenie along with his little sister Jessica, were frequently on his mind and in his heart. On November 21, 2021 the world as everyone in Adly’s life knew it changed. As Adly went on to glory, he leaves behind countless memories and so much love. He will be remembered for the loving person he was and for his love for his dream career in law enforcement. He leaves behind to mourn his passing… Wife: Lakesha Daughters: Avanti, Amiyah, Aniyah Step-son: Stephen Parents: Amonio and Viergenie Sister: Jessica Adly was the kind of person that would walk into a room and although quiet at times, you could feel his beautiful aura. It was this aura that made him such an amazing person as he leaves behind too many family, friends and loving co-workers to name individually. Rest in Peace Officer Adly Joseph

The family of Adly Joseph created this Life Tributes page to make it easy to share your memories.

Send flowers to the Joseph family.