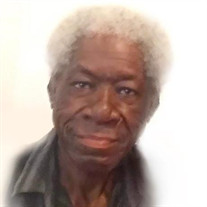 Mr. Abraham Burgess, son of the late Alonzo and Ollie Burgess was born December 10, 1939 in Lake City, South Carolina. He was baptized at an early age at St. John United Methodist Church in Lake City. At the tender age of 16, he moved to South... View Obituary & Service Information

The family of Abraham Burgess created this Life Tributes page to make it easy to share your memories.

Send flowers to the Burgess family.